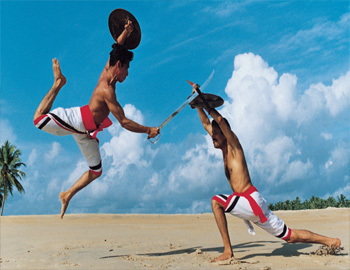 Believed by many historians and scholars as one of the oldest and most scientific and comprehensive system of martial training existing in this world today, Kalaripayattu the ancient martial art of Kerala truly deserves the title of the forerunner of all martial arts. With the help of the available historical evidences, the present kalaripayattu can be traced back to the l2th century A.D. The word 'Kalaripayattu' literally means 'combat training inside the gymnasium'. The word kalari has been derived from the Sanskrit 'Kholoorika' meaning a military training ground. The traditional training of Kalaripayattu is always done inside a 'Kalari' which is a specially constructed practicing area, where the presiding deities of the art and the entire line of gurus of the tradition is ritualistically represented. Not only is the Kalari a temple of learning, it is also a temple of religious worship with a cult and ritual of its own. The master who is addressed as the Gurukkal' is revered as the representative of the deity and is considered as the living embodiment of a long line of gurus.

The training consists of self disciplinary training and physical culture. The pupils are given regular physical exercises and training in the use of such weapons as Kuruvadi (short stick), spear, dagger sword, shield etc. The most promising of the trainees are taught the Marimbas, viz. the vulnerable points in the human system. The kalaripayattu training aims at the ultimate co-ordination of mind and body.

The traditional training of the Kalari gurukkal includes as can be seen in some other martial arts specialization in indigenous medical preparations and techniques of treatment and healthcare. Based on the Ayurvedic system of medical practice the old masters of Kalaripayattu have indigenously developed methods of treatments for kalari related injuries like bruises, fractures etc. known as kalarichikilsa. The training of the gurukkal also includes the special system of full body oil massage to develop flexibility and muscular texture also to stimulate circulation to maintain general health.

Many of the traditional performing art forms of Kerala like Kathakali, Koodiyattam, Velakali etc have drawn elements from Kalaripayattu during their stages of evolution. Kathakali has borrowed much from Kalaripayattu in its basic body preparative training of the actor not only in terms of techniques in practice but also from the body massage for the trainee. Many of the body postures, choreography and foot work of the Kathakali characters are taken directly from Kalaripayattu.

Kalaripayattu declined after the l7th century but in recent times it has staged a revival, thanks to the activities of various kalari sanghams.

OTHER FORMS OF MARTIAL ARTS 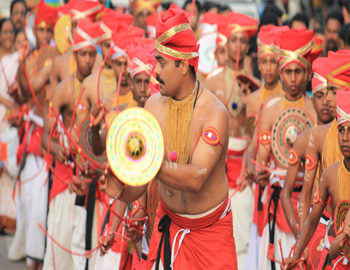 The 'Parisakali' of North Malabar and 'Velakali of Travancore. are two other martial art forms which involve considerable physical training and knowledge of the use of the arms. The latter is also semi religious in the sense that it is a mock fight representing the battle between Pandavas and Kauravas at Kurukshetra. It is played in connection with the temple festival at Shertallai and Ambalapuzha as well as Sree Padmanabha Swami Temple at Trivandrum. There are also other martial art forms like Valeru (sword throwing), Kunderu and Njaninmel kali (tight rope walking) which are performed in connection with festivals in temples.

A very important contribution of Kerala in the field of martial arts in recent times is the circus. The Cannanore-Tellicherry area of North Kerala is known as the home of circus in India. The Great Circus Acharya of Kerala, Keeleri Kunhikannan Teacher was born here in 1858. His mastery over the art of 'Kalaripayattu' and wrestling' helped him to study the modes of Gymnastics and sports practiced by the English officers. Thus the martial arts like Kalaripayattu practiced by the people of Kerala through the centuries have helped in putting the state in the forefront of Indian Circus.