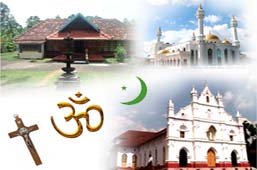 The rise and spread of religions in Kerala is an exciting story. A rich and diverse mix of cultural streams, Kerala holds a fascinating mosaic of people. They call themselves Malayalees but yet they have managed to retain many of the characteristics that make them rugged individuals within the complex of Kerala.

Buddhism has its roots in Kerala even in the 3rd Century B.C. But these faiths merged into Hinduism and now it is very difficult to find people practicing Jainism. In the beginning of the 5th century A.D. Aryan culture had spread over a large part of Kerala.

The caste system was interwoven into the social fabric of Kerala. The Namboodiri Brahmins occupied the topmost position in the caste ladder followed by the warrior class and the untouchables. Under the Namboodiris a curious social practice known as `Sambandham' came into being.

Under this system ,when the eldest son of a Namboodiri family married a Namboodiri girl, the younger sons were permitted to enter into relationships with Nair women. Ambalavasi is a class of temple attendants who occupied a position between the Brahmins and Shudras in the caste structure.

The Nairs in Kerala traced their origin from the Dravidians. Most of the kings of Kerala were of Nair class and so were the warriors of this land. The Nairs could have brought this system down with them from the Indus Valley or it could have developed as a result of their way of life. There is a legend that says that the Thiyyas and Ezhavas either by passed Kerala by migrating southwards or they left Kerala and settled in Sri Lanka and the island chain of Lakshadweep.

Neither the Nairs nor the Namboodiris has the social sanction to become traders. This slot has always been reserved for the outsiders. First it was the Romans and the Greeks, then came the Semitic Jews and Arabs. By the lOth century the Jews had established themselves well enough to earn official recognition which came in the form of a charter of privileges granted by the Chera ruler Bhaskara Ravi Varma to Joseph Rabban. leader of the Jewish community in Kodungalloor. With the arrival of the Portuguese the Jews were forced to leave Cranganore for Cochin in 1565. Here they built the famous White Jew Synagogue in 1567. The Synagogue situated in the Jew Town, Mattancherri, is one of the land marks of Cochin even today.

Global developments of the twentieth century had great impact and diverse cultural influences. According to tradition, Christianity was introduced in Kerala in the 1st century A.D by St. Thomas, the Apostle. He is said to have landed at Maliankara a place adjoining Muziris - Kodungalloor - in 52 A.D converted several Brahmin families and founded seven churches on the Kerala coast. Many modern historians question the authenticity of the St. Thomas's tradition.

In the background of the extensive trade relations that existed between Kerala and the Mediterranean countries, the visit of St. Thomas cannot be brushed aside as an impossibility. Since St. Thomas had come from Syria, they called themselves Syrian Christians. The Portuguese who established their political influence in Kerala after 1498 A.D introduced Latin rite. The Decrees issued by the Synod of Diamper (1599) gave an impetus to the process of Latinisation. In course of time a large community of Latin Christians sprang up in Kerala particularly in the coastal area.

The commercial contacts between Kerala and Arabia led to the advent of Islam into Kerala. As early as 643 AD, Malik Ibn Dinar, a disciple of the Prophet Mohammed arrived here to preach Islam and built the first mosque in Kerala. Many of the Arab traders and their local associates became followers of this path and Islam established firm roots in the soil of Kerala. The new religion received royal patronage in some States and a Chera King is said to have become a Muslim and gone to Mecca.

There was the princely family of Ali Rajas who had been Hindus before their voluntary conversion. Calicut and its surroundings have a rich and powerful Muslim community. In the course of centuries Islam spread to all parts of Kerala and today next to the Hindus and Christians they are the most influential community in the State.

Social and cultural consciousness also began to make itself felt among the hitherto backward sections of Kerala Society. The teachings of the great Saint Sree Narayana Guru provided the Ezhavas with the necessary impetus to form in 1903 the Sree Narayana Dharma Paripalana Yogam. Perhaps the earliest such body in a depressed community. This in due course fostered ia strong sense of openness. They are now a powerful political force.

Intermarriages between the European colonials and local people produced the Anglo-Indian community of Cochin distinguished by their European surnames, Western life styles and the use of English languages as their mother tongue. The majority of these people however have migrated to Britain, Canada, Australia and New Zealand, and the Jews to Israel. 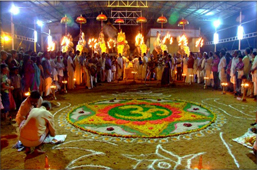 The Hindus of Kerala worship all the major Gods and Goddesses of the Hindu pantheon as well as several minor deities. Siva, Vishnu, Bhagavathi Sastha, Subramanya and Ganapathi are the major deities. The minor deities include Parasurama, Brahma, Hanuman, Saraswathy, Mariamman, Madan etc. Apart from the worship of these deities, the Hindus of Kerala have also evolved through the ages such practices as Naga worship, Ancestor worship, demon worship and tree worship which persist to this day. Centers of worship have sprung up in different parts of Kerala based on the worship of various deities and the religious practices mentioned above. 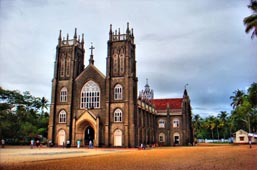 The church plays a very important part in the life of Christians. It is customary for the entire Christian community to assemble in their respective parish churches and attend prayers on Sundays and other festival days. 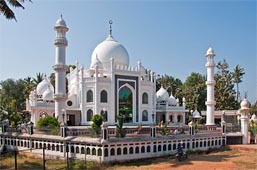 The Sunnis form the majority of Kerala Muslims. They observe the five essentials of Islam viz. The recital of the Shahadat or creed, the five daily prayers. Niskaram, observing the Ramzan feast, giving alms to the poor and the pilgrimage to Mecca. Almost all Muslims go to the mosque for the Juma or Friday prayer.

Of the customs peculiar to Kerala the most important ones are the Marumakkathayam system and the joint family system. The Marumakkathayam system determines inheritance through the female line. The Kshatriyas, the Ambalavasis, the Samanthars, the Nairs, some of the Ezhavas, the Nanjinad Vellalas and some Muslims followed this system. The joint family system where the members live under same roof without partition with the eldest male member of the family called `Karnavar' who exercise full powers over the affairs of the family is also peculiar to Kerala. Among the Marumakkathayees, it was the custom that the wife and children of a male member of a joint family used to reside in the joint family of which his wife is a member. As a result of intense social pressure, legislative enactments sanctioned the single family system and adoption of Makkathayam inheritance through male line.