Kerala has a tradition in the field of painting which goes back to the post Ajanta period. Art in Kerala has always been the expression of religious ideas and sentiments. The temples have been the center of its origin and growth. The murals in the temples of Kerala are remarkably expressive of the religious outlooks of the people. Most of the murals now seen in Kerala temples belong to the period from the fifteenth century onwards.

The murals of Tirunandikkara, now in Tamil Nadu and Tiruvanchikulam are among the earliest specimens of Kerala painting. The Brahma temple, Mitranandapuram contains mural paintings depicting Vishnu. The murals in the Sri Padmanabhaswami Temple, Trivandrum, depicting puranic themes are noted for their remarkable skill in workmanship. Names of temples that may be specially noted includes Aranmula Parthasarathi temple, Panayannarkavu, Bhadrakali temple near Mannar, the Sri Vallabha temple, Tiruvalla, the Vishnu temple at Trikkodithanam. 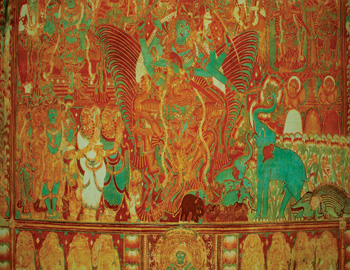 Mural paintings with Hindu religious themes may be seen in the main palaces. On the topmost floor of the Padmanabhapuram palace are more than forty murals depicting religious themes. The bed chamber and four other chambers in the Dutch Palace, Mattancherri, are decorated with paintings depicting scenes from the Ramayana and Hindu mythology. The Krishnapuram palace at Kayamkulam also comes in this group. The Natyagriha recently built in the Kalamandalam at Cheruthuruthi contains the latest specimens of mural paintings in Kerala.

The churches of Kerala contains paintings, which depict characters and scenes from Christian mythology. Some of the paintings are of deep religious significance to the devotees. To this category belong the paintings of Virgin Mary in the churches at Edappalli and Vechur. In the Orthodox Syrian Church at Manarcad there is a beautiful Italian painting representing Virgin Mary holding infant Jesus in her hand. The Orthodox Syrian Churches at Cheppad and Mutanthuruthi contain some interesting murals. Among the church murals the huge one on the outer walls of the Kanjur Church which depicts the scene of a battle fought and those of the English East India Company aided by the bare footed local militia on the other deserves special mention. It has been executed in the indigenous style typical of Kerala.

Swati Tirunal gave the impetus to the traditional pictorial art of Kerala which came to an end with the closing decades of the eighteenth century. Painters from neighboring states were appointed to decorate the walls of royal palaces. Raja Ravi Varma of the royal family was an excellent painter who had a keen eye for local scenes.