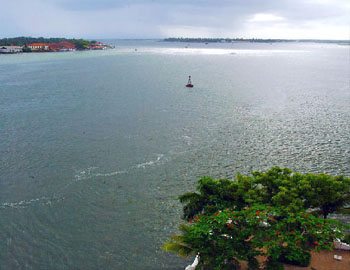 Famed for its natural harbour, one of the finest in the world, Kochi has earned the sobriquet "Queen of the Arabian Sea". Kochi is one of India’s most interesting cities. Here you can see the oldest church in India. The ancient temples, churches and synagogues in this district are of special interest to the archaeologists and historians. From time immemorial, Arabs, Chinese, Dutch, British and Portuguese sea farers followed the sea route to Kochi and left their impression on the town. A Jewish community with roots going back to 1000 AD, a 16th century synagogue, and a palace built by the Portuguese and given to the Raja of Kochi which was later renovated by the Dutch are part of Kochi.

Kochi port is one of the largest in India. All the islands that make up Kochi are well connected by Ferry. Bridges and roads connect Ernakulam with Willingdon Island and the Fort Kochi/ Mattancherry. The Portuguese Fort is situated on the northern end of Vypeen Island at Pallipuram. The Chinese fishing nets, a method of fishing established in Kochi during the times of Kubla Khan can be seen at Fort Kochi. Kochi International Airport is situated at a distance of 35 kms from town. 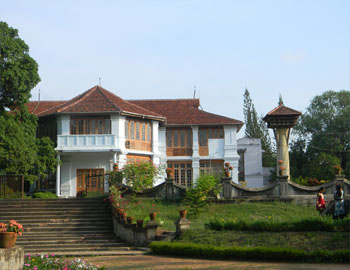 Declaration of Thrippunithura as heritage will preserve its old world character, says K.Pradeep - After years of dilly-dallying and loss of precious heritage monuments there has been a clear verdict. Thrippunithura has been notified as a heritage zone. This initiative will promote conservation of heritage building and the precincts through a coordinated approach involving local bodies and the town-planning department.

Thrippunithura's spirit expresses itself in its architecture, quality of life through a vibrant culture- all of which acted as a magnet to visitors and new settlers. The erstwhile capital of the Cochin Royalty, this town, elegantly historic is fast turning to be daringly modern. Bearing a huge brunt of the burgeoning Cochin population, Thrippunithura has been pulling down ancient structures to keep pace with the constant demand for space.

A set of regulations in the form of a bill has already been drafted and approved. It is now with the law department. It is only a matter of time now for us to get the formal clearance .The rules will be implemented by the Art and Heritage Commission, which is empowered to list heritage structures, impose development control and initiate action against violation of rules, informs V. Manmadhan Nair, Director of Archaeology, who is a member of this commission.

Another part of this conservation strategy is the inclusion of a package of incentives to the owners of the building that fall within the heritage zone. One of the major incentives will be the subsidy on property tax for the listed buildings. Buildings will be graded and those that fall under Grade 1 will enjoy total tax exemption, Grade 2 and 3 will get 50 and 25 percent respectively. There will be no restriction on sale of the property or building. But we will insist that he buildings, if they are listed ones cannot be demolished. They will, however, have the option of renovating it according to designs that gel with the whole area and buildings around. . Owners will also be permitted to convert buildings or portions of it for commercial or institutional purposes if they agree to preserve and restore the structure, Mr. Nair says.

This time the finance commission expects something to the tune of 20 crores and this will be used to renovate heritage buildings and areas that need immediate attention. After thorough inspection 21 buildings within the fort area in Thrippunithura were picked for renovation and conservation. Most of them were situated around Sree Poornathrayeesa temple. They are now owned by members of the Cochin Royal family, some of them by municipality, government and the Cochin Devasom.

Top priority will be given to the reconstruction of the Puthen Bungalow. It is under the Higher education Department and like most of the PWD buildings has come to seed. The RLV College for Music and Fine Arts that will be shifted soon to its premises will be put to adaptive reuse, making is functional but in accordance to the rules of the Heritage bill, says professor Ramaswamy, architect and consultant of the commission.

There has been a lot of misunderstanding about the heritage zone among the people in Thrippunithura, especially the members of the Royal family. Apart from being worried that they may have to surrender possession rights to the government they were irked by the Governments ineptitude in the protection of many a government owned building in the area.

The authorities made earnest efforts to convince them that their fears were unfounded but it is unlikely that the have fully succeeded. The Government is not going to disposes anyone from ownership rights. You have the Fort Cochin model before you. This will turn out in to something like that. We are only concerned about looking after the history of the environment in the town, for you and the future generations, reiterated Mr. Nair.

It was only natural that there were misconceptions and doubts. This happened because the preliminary list was prepared without any sort of consultation with the members of the royal family or those staying within the zone. Now that a 10-member committee has been formed with some of us as members we feel that there can be additions or commissions from this list. It is not that any of us are against preservation and conservation of our heritage. In fact we are glad if some sort of aid can be given to maintain the properties under the VTK trust, doubts are only regarding private holdings, especially those still not partitioned, feels S.Anjuan, secretary of the trust.

Whatever be the doubts, misconceptions, one thing is sure, this town, so traditional, forward looking with a foot in the past, needs sincere efforts to make it one that is in harmony with itself.